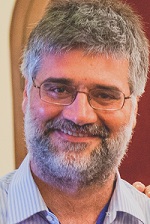 Athanasios G. Malamos received Bsc in Physics from the Univeristy of Crete (1992) and Msc and Phd from the Technical University of Crete at 1995 and 2000 respectively. From 1997 to 2002 he was research assistant and researcher in the ICCS National Technical University of Athens. From 2002 unitl 2019 he was with Technological Educational Institute of Crete, Dept. of Informatics Engineering (former name of department Applied Informatics and Multimedia). Since May 2019 is professor and head of the Electrical and Computer Engineering Dept., of Hellenic Mediterranean University. Dr. Malamos is also head of the Media Networks and Communications Lab, and he has worked as researcher or project coordinator to many EU and National (Hellenic) funded research projects. He is an active member of the WEB3D community and he is leading the Spatial Sound group of interest and is member of the web3D Consortium semantics group. His team contributed the spatial sound, the Humanoid, the Physics libraries and streaming in X3DOM platform. He has served as Guest and special issue Editor in International Journals. Dr. Malamos has served as program and organizational committee in IEEE and ACM international conferences and workshops. He is regular reviewer of IEEE, Springer as well as other international journals. Dr. Malamos is honored with the ACM Recognition of Service Award and by the WEB3D consortium with recognition of his efforts as a member. His research interests include multimedia services, multimedia semantics, WEB3D and Virtual Reality.

Head of the laboratory